January 10, 2016
There's a simple "Get Started" Guide on the redhat website, which briefly outlines how to get a sample OpenStack system up and running in 5 steps.  The first, easily overlooked step is to start by installing a "minimum-install" version of RHEL7 on a physical system.  If you've already set up and configured a system that you're using for everyday tasks and/or work functions, be aware that the installation will repeatedly fail with errors due to incompatible options, missing dependencies, etc.

Provided that you've followed the consequent steps in the guide to register the system and enable the pertinent repositories, the next step is to install and run the packstack script:


This is a rather lengthy python script that uses some puppet modules to install the necessary software components and configures the system as the OpenStack All-in-One server.  According to the packstack documentation, "It can be used to install each Open‐ Stack service on separate servers, an 'allinone' server, or any combination of these." Expect to wait a while for the script to finish running, meanwhile crossing your fingers that it completes successfully; otherwise, check the error output along with the error log that'll be specified in the output.

If the packstack script finishes successfully, move on to the next step in the Guide and go to the OpenStack dashboard in your web-browser; the packstack exit status will provide the necessary instructions on how to get to the dashboard.
Alternatively, if the script failed with errors, read on for some common troubleshoot procedures in the next section. 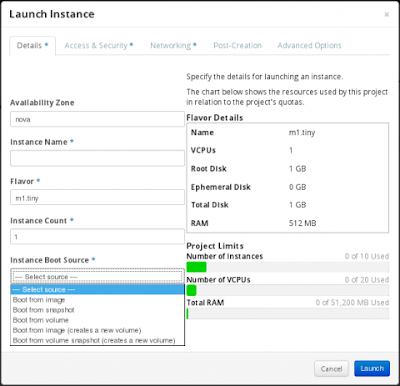 If you've failed to heed the advice provided in Step 1 of Red Hat's Get-Started Guide you're likely to experience failures in the packstack script. There are a number of bugs reported about the OpenStack installation script; though, a large percentage of them are, ultimately, stemming from users attempting to install OpenStack on an existing system with incompatible software packages and configurations. As frustrating as it may be, the packstack script is written so that existing software and their configurations are not forcefully erased, overwritten, or otherwise replaced. Therefore, one can also perceive it as being a safe, rather than an indiscriminately reckless approach.

According to the relevant bugs, as well as my own experience troubleshooting the installation on an existing non-"minimal-install" RHEL7.2 host, there are a few common problems that arise in this scenario. The first problem will manifest itself if the user has an existing MariaDB server installation.

First, packstack may return the following error if there are installed software packages that depend on the existing MariaDB instance:

The relevant bug for this is 1268868.
The workaround for this is to remove the dependency first, e.g. akonadi-mysql or akonadi: Take care to notice if any other packages are pulled in to be removed, especially if you have a KDE Desktop Environment installed. Then, proceed as you wish, either cancel the procedure or use a different DE :D.

Next, packstack may exit with an error complaining about missing permissions if your mysql server's (MariaDB) root user is denied access without a password; in other words, you need to remove the SQL-root user's password:

This will prompt you for the current password for the mysql-root user, then the prompt will ask for the NEW password. To remove the password, simply leave the NEW password prompt empty and hit Enter. This is, obviously, a security concern; so, if you have a useful, important database already set up, think carefully before you proceed with the prvious workaround.

There are potential compatibility issues with certain apache modules that packstack complains about, resulting in a non-zero exit status. Specifically, the NSS apache module, mod_nss, will cause packstack to fail. The relevant bug is Bug-1257352 on bugzilla, which is closed as NOTABUG as explained there. The workaround is to remove mod_nss package:

Alternatively, one can tell the apache server not to load the module, either by commenting out the lines in the file /etc/httpd/conf.d/nss.conf or by moving the file to a different location, temporarily.

Similarly, /etc/httpd/conf.d/php.conf will cause a problem and needs to be (re)moved or otherwise indicate to the apache web server not to load the offending file, options, module.

April 13, 2016
https://access.redhat.com/solutions/1417483 In RHEL 7 there is rate-limiting both in systemd-journald and in rsyslog's imjournal module Lower Ratelimit Interval Lower the interval for rate-limiting and increase the burst level in order to minimize the possibility of losing log messages when the threshold is reached for the specified number of messages logged within the specified interval. Rate-limiting is specific to each process, so there's usually no reason to change this. It is also inadvisable to disable this feature entirely! grep -i rate /etc/systemd/journald.conf #RateLimitInterval=30s #RateLimitBurst=1000 RateLimitInterval=10s RateLimitBurst=3000 grep -i rate /etc/rsyslog.conf #$imjournalRatelimitInterval 600 <--default $imjournalRatelimitInterval 300 $imjournalRatelimitBurst 30000 journal corruption journalctl --verify journalctl --force
Read more